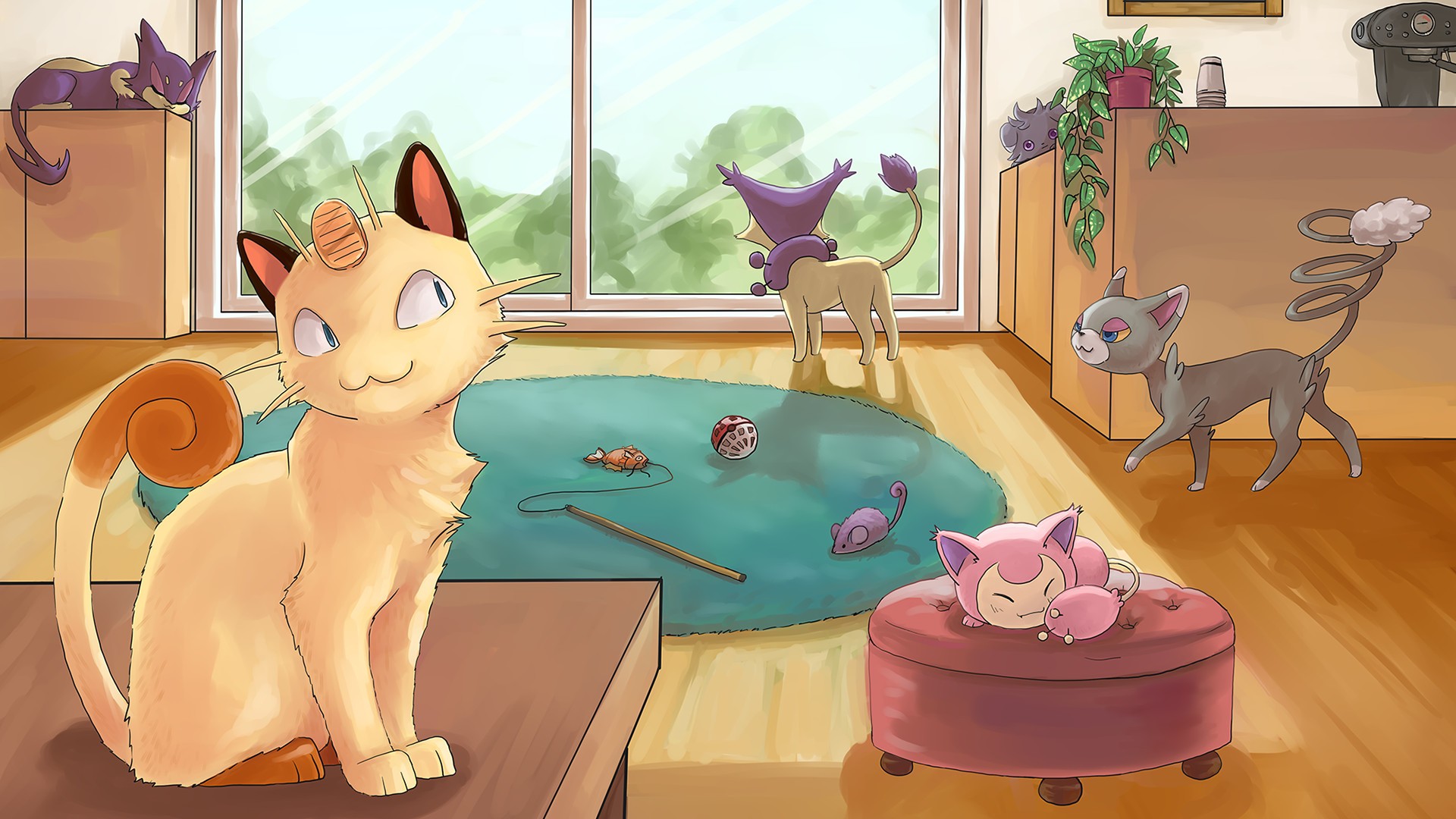 All Pokemon are inspired by some form of animal, mythical beast, or object in the “real world”. They can be as obvious as a Squirtle being a turtle or as complex as a Jynx – which is said to be based on Yama-uba in design. But you came here for cats, didn’t you!? Here are all of the cat Pokemon!

The most famous pair of felines in the Pokemon world are without a doubt, Meowth & Persian. Meowth became the famous lippy cat of Team Rocket’s Jessie & James, being the only Meowth who can actually speak English. Why they continued to go after a generic Pikachu is beyond me! Persian which is the evolved form of Meowth is well known for being Giovanni’s (Team Rocket leader) cynical cat.

These two cats are something like a pincushion and a pillow. No, seriously… Have you seen them? Skitty is a very cute and lovable form of a cat designed to appeal to the female fan base with its plush pink detailed coat and seedling like appearance. Delcatty, Skitty’s evolution form, goes for more of an almost flower-like appearance. I can’t help but stare at the neck pillow around Delcatty’s neck…

When it comes to a stereotypical pair, these two take the cake… err fish? Glameow is a prissy and classy cat, something like a Siamese cat. What makes it funny is that it starts out small and cute and then grows or rather evolves into a very plumpy not-so-cute cat. Nothing wrong with a fat cat but I think the name implies it goes from “glamorous” to “ugly” as it evolves.

If Catwoman was not used to inspire this Pokemon duo, I’d be shocked! Purrloin has the typical cat features with a bit of a “masked” look to it. Liepard takes on another look entirely and clearly showcases that Purrloin becomes a leopard of sorts. A very nice concept and very vibrant colors make these two cats stand out from the rest.

While the ears may confuse some, this is definitely a cat styled Pokemon! I am not 100% sure what kind of cat it is modeled after but I would like to think of it as a panther mixed with a lion. Shinx is an adorable cub not featuring any of the black mane around the head, likely to be based on a lion or lynx cub. Luxio starts to bring in the mane with a very tough look. Finally, Luxray shows the full mane with the toughest look of the trio. I am not sure why, but Luxray reminds me of Sonic.

Ah! The lion Pokemon! I really do appreciate how they approached this concept. When you have a male Litleo, it becomes a well-maned male Pyroar but if you have a female, it becomes the female equivalent with no mane. This concept is also seen in other Pokemon and is something I wish they did since first gen. Either way, Simba would be proud!

I can’t be alone with saying that Espurr looks like that one stuffed animals that didn’t get played with enough! I love the concept behind it, almost appearing like a teddy bear. Meowstic is another Pokemon to feature both sexes, the navy being a male and the white, a female. Whichever you prefer, both are very cute and quite tough for their size!

The newest addition to the list is none other than one of three starters from Pokemon Sun & Moon, Litten! This cute cat has the appeal of the tradition “I’d had enough petting for the day” cat with a fun twist… It is a fire type! Unlike Pyroar, this little guy is far from a lion! The second stage (Torracat) has some differences that begin to make this Pokemon tougher including a fire bell, claws, and a slightly more “rugged” coat. Litten’s final stage (Incineroar) is basically what I would consider Pokemon’s cat-man version of Brock Lesnar. I shall call him… BROCK!… LESPURR!

This fierce-looking fella is the featured Legendary Pokemon of the Sun game that will be coming out in November. His design is very different from Pyroar in that he appears more like the sun and has a galaxy-inspired forehead. Believe it or not, he is not even a fire type! NOPE! He is a steel and psychic type. Mega-Metagross is an example of how powerful this mix can be! I have a feeling Solgaleo will be an instant favorite for people into competitive play.

Dusk Mane Necrozma is a fusion of Solgaleo and the ultra beast, Necrozma. Whilst this is a fusion and not a stand-alone cat Pokemon, I feel it is worth adding seeing as it is still a form using Solgaleo, the Sun Legendary lion.

This 4’11 feline juggernaut will be a fast favorite! Its base speed is 144 which beats out Electrode, making it the fastest electric Pokemon in the game! Zeraora also comes equipped with its own signature move, Plasma Fists. This fierce kitty also soaks up any electric-type moves, too!

Perrserker is the latest feline addition to the Pokemon franchise and is available right meow in Pokemon Sword and Shield! Standing just over 2 and a half feet, this little guy is a bipedal viking kitty that evolves from the Galarian Meowth at level 28. Its name is a play on the term “Berserker” which is a Norse Warrior.

The complete list of cat inspired Pokemon as of the latest games, Pokemon Sword & Shield are:

It’s worth mentioning that there are other Pokemon who do have cat-like features but because they are too heavily split between being a cat and something else (Like Snorlax for example), they did not make the list. Many common ones people put up for debate include the Eeveelutions, Mew, Raikou, and Absol. The Eeveelutions are based on elemental foxes, the balance of energies in “one”. Mew is an embryo-like alien said to be formed from mixed DNA of all Pokemon. Raikou is based loosely on Raiju, also known as the “thunder beast” and is made up of dog, cat, and rodent parts. Finally, Absol, which is loosely based on Bai Ze meaning “White Marsh” in Chinese. 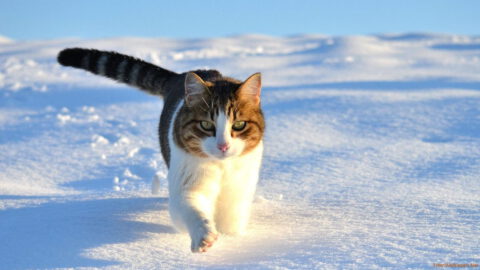 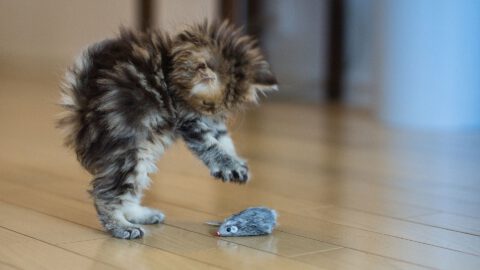 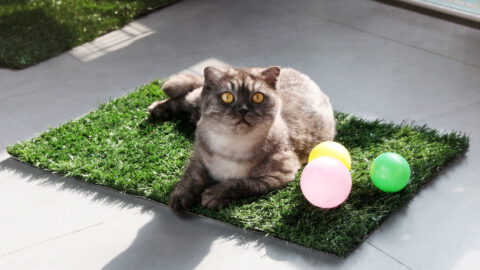 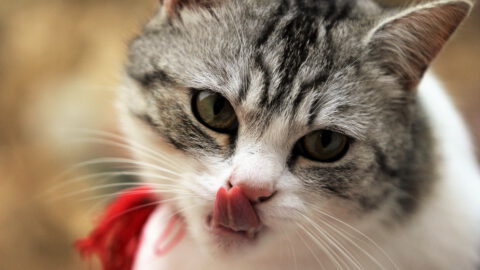 Read the “You Missed One!” section for an explanation on that.

Just a note: Zeraora does not actually beat or even have a speed tie with Electrode, as Electrode’s base speed stat is 150, beating out Zeraora by 7 Base Stat Points. Of course, this ignores any differences in IVs, EVs and Natures, but if all of these factors are equal on each, then Electrode will keep rolling right past the thunder kitty!

The Shinx line is based on the Lynx, not some panther/lion hybrid

It definitely has some lion elements in it, but I agree. I doubt any Pokemon are based on just one real animal.

you forgot mew lol the only pokemon that looks like a normal cat and not some super expensive pure-breed. normal cat > expensive cat …. pokemon world.

Read “You Missed One!” section.

Hoping to see more in the new games

Solgaleo is the best!

I love Litten and torracat, but I hate Incineroar, I picked litten because it looked like a cat, and then it evolved to torracat and I liked it even more but then when it evolved again I got, Incineroar, it doesn’t look like a cat anymore, it looks like a generic muscular WWE wrestler with fur, which is noticed what I want…

I know! Thats why I chose litten too… INcinaroar was just dissapointing.

You’re missing my favourite legend, Raikou! Not to mention Mew and Mewtwo!

Thanks for your comment Raike. As mentioned, Mew is based on DNA so it is meant to look like an embryo of sorts. The name “Mew” applies to the sound of a baby animal. Cats aren’t the only ones to mew when they are babies. Mewtwo again is based on DNA and also cloning. Raikou is considered a Pokemon based on Raiju the thunder beast which is made up of feline, canine, and rodent parts. The list is for cat/feline only Pokemon.

I’m sure that’s true, and if there is one legendary pokemon that i connect with, it HAS to be raikou.

mews body shape and if it did movements not hovering. appers would move like a real cat. mewtwo i dont think belongs on the list since he is combination of cat-like pokemon mythical being and kangeroo?

Mew also seems very kangaroo-like to me. Also, I don’t think a cat Pokemon would have “Mew is said to possess the genetic composition of all Pokemon.” as part of it’s Pokedex entry. And, Mewtwo is Mew’s child/another being made of Mew’s DNA. How would Mew be a cat Pokemon and Mewtwo not? Mew is felinoid, but not as much as the Pokemon on this list.